Young Washington Redskins fans need to watch youtube videos of the Redskins before their time to learn the players and history of our great team. There are so many great games the Redskins have played since 1932 and so many great men who have worn the “Spear, the “R”, and the current Redskins helmet and the Burgundy and Gold. Those days were when football was really football and real men played the game. They played for the love of the game and for each other. 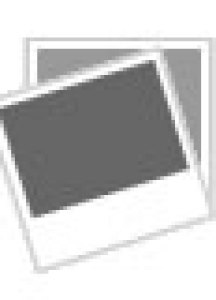 XXMark Eric May was an All American from the University of Pittsburgh. He played for the Washington Redskins, who drafted him in the 1st round in 1981 to 1989. Two time Super Bowl Champion, XVII and XXII. Pro Bowl in 1988. Member of the 80 Greatest Redskins, winner of the coveted Outland Trophy in 1980, Unanimous All-American 1980. His college, the Pittsburgh Panthers retired his number, #73. Played RG, right guard for the Washington Redskins and an original member of the famous “Hogs”. I believe he should be in the Hall of Fame. 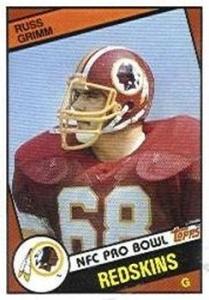 XXRussell Scott “Russ” Grimm was an All-American center also from the University of Pittsburgh. He was inducted into the Hall of Fame in 2010. With the Redskins from 1981 to 1991. He played Guard with the Redskins and Super Bowl Champion in Super Bowls XVII, XXII, and XXVI as a player, He also went into coaching. He coached the tight ends and offensive line with the Washington Redskins and the offensive lines with the Pittsburgh Steelers, Arizona Cardinals, and Tennessee Titans. As a coach, he won another Super Bowl XL. From 1983 to 1986 he was selected to 4 Pro Bowls and chosen NFL All Decade Team, 1980’s and a member of the 70 Greatest Redskins. https://www.tradingcarddb.com/Images/Cards/Football/3235/3235-381Fr.jpg

XXJeffrey Lynn Bostic was the “hogs” center. He played for the Redskins from 1980 to 1993. He was All Pro in 1983, selected to the Redskins Ring of Fame, 3 time Super Bowl Champion XVII, XXII, and XXVI. He also is a member of the 70 Greatest Redskins. He also should be in the Pro Football Hall of Fame. 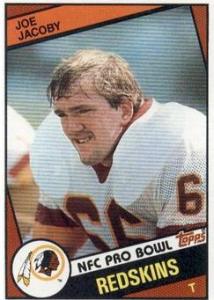 XXJoseph Erwin “Joe” Jacoby was undrafted and signed with the Washington Redskins. He had played his college ball at Louisville. Jacoby was the lead blocker on John Riggins’ famous 4th and 1 touchdown run which ensured the Redskins’ Super Bowl XVII win. He also is a 3 time Super Bowl Champion, XVII, XXII, and XXVI. He too was a 4 time Pro Bowler, in the Washington Redskins Ring of Fame, NFL 1980’s All Decade Team. In my opinion, it is a crime, a disgrace that Jacoby is not in the Pro Football Hall of Fame. 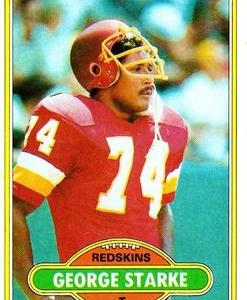 XXGeorge Lawrence Starke played for the Washington Redskins from 1973 to 1984. He is an original member of the famous “Hogs” and Super Bowl XVII Champion. He was known as “Head Hog”. He played 13 years. Starke is a member of the 70 Greatest Redskins. Starke capitalized on the notoriety of the “Hogs” by organizing and getting each of the “Hogs” to invest $500.00 and forming a corporation called “Super Hogs”. They became the first professional athletes of any sport to market themselves outside of the NFL.

XXFrederick Gregory Dean was a guard and Super Bowl Champion XVII. He played his college ball at Texas Southern. This former Chicago Bear came to the Redskins in 1978. He was a Redskins offensive lineman and retired after winning the Super Bowl vs the Miami Dolphins. After football, he was on the coaching staff at Howard University for over 20 years. He was a good pass protector for quarterback Joe Theismann. 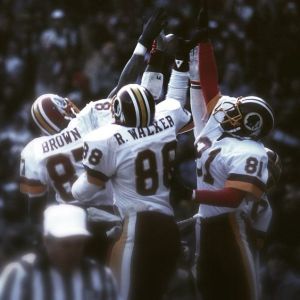 XXRichard “Doc” Walker played his college ball at UCLA and they won the Rose Bowl in 1976. He played two years with the Cincinnati Bengals, then to our Washington Redskins in 1980 to 1985. Walker was the perfect “team player” and an original member of the famous “Hogs”, he assisted the five starting offensive linemen with crushing blocks and sealing the edge and also a clutch tight end receiver. I personally remember one clutch catch to the two yard line – two defenders tried to keep Walker from scoring but he was not to be denied and scored the touchdown. 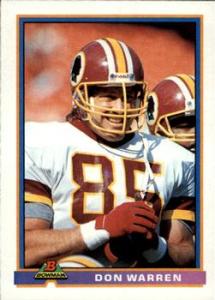 XXDonald “Don” James Warren played 14 years for the Washington Redskins 1979 to 1992. This tight end was a 3 time Super Bowl Champion, XVII, XXII, and XXVI. He played his college ball first at Mt. San Antonio College and then transferred to San Diego State University. Warren was an exceptional blocker and an original member of the famous “Hogs”. Warren is a member of the 70 Greatest Redskins.

I want to point out that “the Hogs” made great running back John Riggins an honorary
“Hog”. These guys were not just great players, but characters with character. They had their own private “5 o’clock Club.” Quarterback Joe Theismann wanted to become a member of the “Hogs” but was refused. He felt he should have been a piglet at least.

In the 1982 season, the 8 and 1 Redskins went 12 and 1 total including the playoffs and the Super Bowl win, but the greatest win was the NFC championship game where the Redskins beat the archrival Dallas Cowboys. Walker was heard in the locker room singing ‘I LOVE IT”. They had avenged the only loss of the season and we going to Super Bowl XVII. Rick Doc Walker still has Burgundy and Gold blood in his veins and is on ESPN 980 Redskins radio with Larry Michael, Chris Cooley, and Sonny Jurgensen during football season. He also is a highly respected motivational speaker and very active in the DMV. Host of Inside the Redskins on NBC.