This 69 year young Washington Redskins fan became a fan in 1969 when famous Green Bay Packer coach Vince Lombardi came out of retirement to be the new head-coach of the Washington Redskins. I had liked the Packers and their Green Bay sweep fascinated me and the famous ICE BOWL (Championship game between Dallas at Green Bay on the coldest day ever, frozen field) was my favorite game at the time.

I knew that Tom Landry, Dallas Cowboys coach and Vince Lombardi, Green Bay Packers coach, were both assistant coaches with the New York Giants.  Friends, but fierce competitors, one coaching the offense and one coaching defense. Landry had played defense and Lombardi on the offensive line as a players.  So the ICE BOWL was not just a game between the players.  It was a rivalry between two coaches who would become legends.

You can see now how the best rivalry in NFL football started when Lombardi became the head-coach of the Washington Redskins. Both were Christian men, Lombardi devout Catholic, Unfortunately, Lombardi died in 1970 and George Allen became the head-coach of the Redskins. George Allen had been the assistant coach under famous George Halas of the Chicago Bears.  The Bears hated Lombardi’s Packers and before that, the New York Giants with assistant coaches Landry and Lombardi. See how Allen, Lombardi, and Landry were longtime rivals as assistants with Bears, Packers, and Cowboys.  COWBOYS VS REDSKINS born out of the personal rivalry between Lombardi and Tom Landry and reinforced when George Allen came to Redskins in 1971. All three of these coaches were innovators, and “color-blind” honorable leaders. 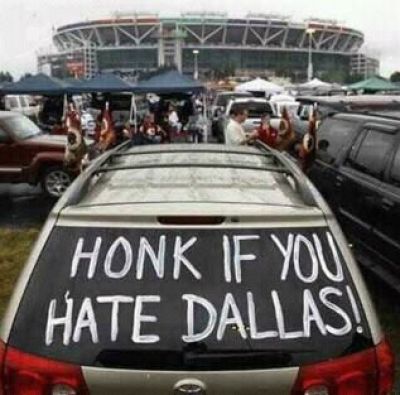 I love this rivalry, always look forward to their games. To me it represents the genius of three of the most successful and famous coaches of all time.  It’s a deep, strong rivalry.  I know some old die-hard Cowboys fans who can name every Cowboy player from Joe Donald Meredith aka Dandy Don Meredith to Tony Romo.  They do not like to admit the very first quarterback of the Dallas Cowboys was the Little General Eddie LeBaron from the Washington Redskins,

You guys like pick this old historian’s brain. Ok, Eddie Lebaron was short, but one tough hombre. All American in college, drafted by the Washington Redskins, then answered the call of duty and joined the United States Marines and was highly decorated for bravery in the Korean War. He was wounded twice and the Purple Heart is just one of his medals he earned, (Bronze Star, others), He went through painful rehabilation and returned to play football for the Redskins in 1952. Players and then fans affectionately called him “the Little General”.  He like “Slingin” Sammy Baugh was a punter also.  Of course Tom Landry wanted a leader at quarterback like Eddie LeBaron.

Here is another reason why the Redskins-Cowboys rivalry become so intense and strong.  George Allen was successful with veteran players.  Remember that in those days there was no “free agency” and most of the time a player played for one team only. Tom Landry used the new gadget, the computer, to help with building his team and future teams through the draft .  On the flip side, George Allen would trade away his draft choices for recently cut ex-All Pro veterans from other teams. They all had one thing in common other than experience at their positions. Teams basically told them “thanks for all your blood,sweat,tears, and pain, but we don’t want you now, so we are cutting you for a rookie.” George Allen studied all the players of other teams and he knew which veterans still had some “gas in their tanks” and signed them for $100 and give away a draft pick!

They appreciated the 2nd chance. In the 1970’s players did not get paid mega-bucks like today’s players do, especially the All Pro players.  The new Redskins players could tell their wives  “I’m still a breadwinner baby, going to be a Washington Redskins and help them kick (ex Team) a$$ when we play them.”  Us fans looked forward to the Redskins playing the Baltimore Colts because we KNEW Mike Curtis had a grudge and wanted revenge, He made 14 solo tackles that day and Redskins won the game, He was a man possessed. Dave Robinson, ex Packer great, helped us beat the Green Bay Packers, Pat Fischer helped Redskins beat the St Louis Cardinals, Big ex-Cowboys running-back Calvin Hill ran all over Dallas in 1976. Jake Scott intercepted passes in the Miami game, You get the picture! George Allen was “their savior” so to speak and they loved him and all had chips on their shoulders and wanted to prove the other teams made a big mistake in cutting them too soon. George Allen’s lifetime record was .667. Won 2/3 of his games as a coach.

Im 69 and still feel the same excitement I felt back in 1969, the 70’s when the Cowboys and Redskins rivalry games were the highlights of the season. The last regular season game of 2015 was meaningless as far as the NFC East Division went as our Redskins had clinched it already when we played the then 3 and 12 Dallas Cowboys,  However, I knew since they had escaped the first meeting with a victory over our Redskins, the Cowboys would love nothing more than to sweep the Division winner Redskins. That would be a highlight in an otherwise disappointing season,  So I knew they would “bring it” and individual Cowboys had incentives also,  Greg Hardy needed just two quarterback sacks to get his 500,000 dollar bonus.  I was proud as our guys too the game seriously and beat them soundly and Greg Hardy failed to get his bonus as our Oline held off the Cowboys defense and protected our quarterbacks.

I could write pages and pages of exciting plays I have seen in the Cowboy Redskins games. Kenny Houston hanging onto Walt Garrison for dear-life to keep Garrison from scoring the winning touchdown on the 2 yardline. I remember thinking “OH MY GOD, where is the help,STOP HIS A…!!! they did, Skins won another close game with the Cowboys,  Actually, I respected Walt Garrison of Dallas, because he was a REAL cowboy, rode in rodeos, Most of today’s Dallas Cowboys have never been on a horse. rode a bull, danced the two-step at a barndance. I know young today’s Redskins fans remember Mark Brunell’s two last minutes touchdown passes to Santana Moss to come back from 13 down to beat  Parcel’s Cowboys 14 to 13 and maybe Sean Taylor picking up the blocked fieldgoal and advancing it downfield far enough for a Redskins game winning field goal. Cowboys had some against us too, I painfully remember.

Redskins fans, get revitalized and informed, updated with Redskins news on Rev T’s Sports Revival. On Tuesday nights at 8 pm,ET  Rev T and his expert analyst Co-host DMV Kell  talk intelligently about all DC sports including our Washington Redskins. “Kirby’s Corner HTTR is on the show as well so tune in and be entertained by the best sports talk radio show on the air!  Getting bigger and better, KINGS of TWENTYSIXTEEN. Just CLICK THE LINK.