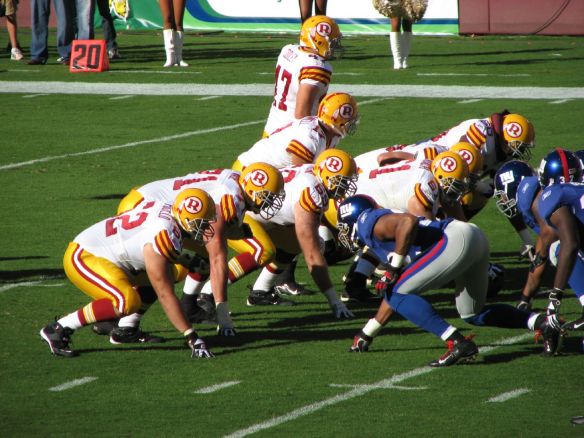 In the early 70’s, the late great Washington Redskins head coach George Allen was the NFL coach who more or less invented the concept of “Special Teams”. Allen was the very 1st to select a coach to specifically deal with kickoffs, punt-returns, extra points, field-goals, punters, kickers, head-hunters, wedge busters, blocking punts and field-goals, and everything other than the offense and defense.

A new era in football was born when Allen realized the true value of kicks and punts:

Any team can easily win any game, or lose any game by only one carefully crafted play, either by positive or negative results.

Our Washington Redskins Special Teams in 2016 are coached by Ben Kotwica, age 41, 9 years experience in NFL. His Assistant Special Team coach is Bradford Banta in his second season with our Redskins. Prior to joining the Redskins, Banta spent six seasons with the Detroit Lions in various coaching capacities. From 2012-13, Banta served as the Lions’ assistant linebackers coach. Under his guidance in 2012, the Lions linebacker corps of Stephen Tulloch, Justin Durant and DeAndre Levy led the Lions in total tackles. In 2013, he contributed to a breakout season for Levy, who led all NFL linebackers with six interceptions. Banta has 19 years experience.

So we know we have great Special Teams coaches. Remember that Special Teams players consist of all kinds of linebackers, defensive backs, wide receivers, and also receive coaching those those specialty coaches like Robb Akey, Perry Fewell, Ike Hilliard, Greg Manusky, and others.

In 2016, I believe head coach Jay Gruden will not put our deep threat DeSean Jackson in to return punts.  We have an explosive player in Rashad Ross.  You saw his speed in 2015 when quarterback Colt McCoy threw an open Ross for a 73 yard touchdown.

Of course, a punt or kick-off return player is only as good as his blockers to give him some “daylight”.  From what I have seen this early, 1st week of OTA’s, we have some excellent players who will be on our Special Team. This Special Team is full of younger, faster, more physical, and smarter players.  I hate to see the very common penalty flag for “illegal block in the back” or other penalties from bonehead play.

In my view, DeSean Jackson is a great return man, but he is too valuable as our deep threat, taking the top off the other team’s defense and they have to account for him, usually with a double team.  To prove my point, without DeSean Jackson in the 1st half of the 2015 season, we lost more games than we won, and when he got back healthy the last 8 games, we went 6 and 2. Plus i am confident in Rashad Ross, so UNLEASH THE ROCKET.  We have other players also who can play that position, but in my view, Rashad Ross is “the man”.

We know General Manager is out there watching the OTA’s and he will not be happy until we have a great defense and special teams like he had with the 49ers and Seahawks under his leadership with those teams.  He has given us two excellent drafts in 2015 and 2016 and we have the players make us champions.

Games are won and lost by turnovers, made and missed field-goals, extra points are not a “gimme” anymore since the NFL moved the kicking spot further away from the goal-posts.  Special Teams play is just as important as the offense and defense plays.  To be a championship team, we need a top defense, explosive high scoring offense, and a great special team.  I believe we shall have a championship team in 2016 in all three phases of the game,

Be sure to tune in on Tuesday nights for Rev T’s Sports Revival.  Rev T says “why “tweet” about it when you can call in and talk about it”.  I recommend this radio show because I know Rev T and his co-hosts Denise and KMV Kell are quality, exceptional, high character fans who love our Washington Redskins, as well as the other D.C. sports teams. They have the program as a service to us, the combined Redskins fans and DC sports fans.  HTTR.

Picture Credit: Pic courtesy of the combined efforts of Marc Gallant and Flickr via CC BY 2.0