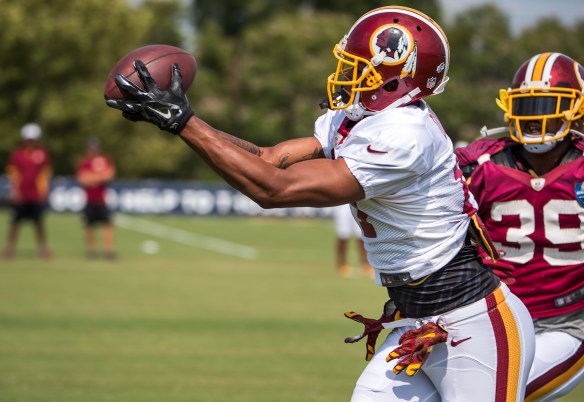 Notable quotes from the first OTA:


General Manager Scot McCloughan knows defense wins championship as he built top defenses with the San Francisco 49ers and the Seattle Seahawks.  He’s watching closely and will not be satisfied with a 24th ranked defense.

In my opinion, I saw our Redskins working on improving our 28th ranked defense. Actually I think the right ranking would be 24 as they were 24th vs the pass and 24th vs the run in 2015.  Regardless, General Manager Scot McCloughan wants a top ranked defense and I see some changes.  Trent Murphy has been moved to  defensive end. That position is complex because it involves run-stopping, gap integrity, setting the edge (keeps enemy player from getting to their outside, keeps the play inside), stop screen passes from gaining yards, pass rush at times,

We have to admit that in 2015 we did not stop the other team from rushing the football very well. Trent Murphy is the right height and size for a defensive end and already has gained 32 pounds of hard muscle is around 290 lbs.  OTA Week 1 showed he still has quickness with his “hand in the dirt” and can bull his way past the other team’s left or right tackle. I think moving Trent to Defensive End is a good move and will help us have a Top defense in 2016.

Also noticed Spencer Long getting reps at Center. In my view, that is our weak link in the O-line chain. He too has added muscular weight, up to 325 and at 6’5″ he should be an upgrade.  Also say Austin Reiter, always was in the Rimmington Award chase in college,  moved from Practice Squad and  getting reps at center.

Noticed DeSean Jackson may forfeit 500,000 bucks for not participating enough in the voluntary workouts.  At least that saves us money and honestly, DeSean stay in top shape and knows the system, 3rd year with our team. I feel he should be there, but I believe its not a serious problem.

Seems like the new training equipment and better trainers and medical staff has kept the injuries down significantly this season compared to last season at this time. I do not think Joe Barry with have to go through 15 defensive backs this season. Kyshoen Jarrett played well in 2015, but was hurt in the last game of the season. Nerve damage to the entire arm, and doesn’t have much feeling in it after full five months!  However, this season so far, we are deeper at defensive backs.

Keith Marshall looked good last day of OTA’s and seems his knees is fully healed. However, head coach Jay Gruden and Defensive Coordinator Joe Barry is keeping Junior Galette from doing much to make sure his injury is completely healed.  He missed all of last season injured about his time in 2015. Kendall Fuller’s knee seems to be ok, He participated in OTAs with no problem. Josh Doctson tended to a sore Achilles. The Memorial Day Weekend break should give it time to relieve the soreness. DeAngelo Hall playing safety now and has not had any injures so far and is doing well at the position.  Our shutdown defensive back Josh Norman is enjoying friendly contests between quarterback Kirk Cousins and him as Kirk is trying to complete passes to receivers covered by Josh Norman. Kirk is doing well vs the defense.  He is confident and showing accuracy, getting the ball out quickly.  Colt McCoy is right on target also.

The coaches seem to be better prepared and organized this season. Last season Robert Griffin III was the starting quarterback and had all 1st team reps. This season “It’s Kirk’s Team” and he is leading and all the players are united behind him. The atmosphere is not as stressful and better this OTA.  I like the attitude of the veteran players toward the rookies and also the attitude of the rookies.  Our rookies seems to be humble, eager to learn, in awe of the vets, and coachable.  The atmosphere  is full of excitement and confidence.  Coaches are holding themselves and the players accountable but everyone seems to be having fun also.

Next OTA’s start June 2 for 3 days as well

Hear all the Redskins news, stay updated and revitalized by listening to Rev T’s Sports Revival on Tuesday Nights from 8-10 pm. He and his exceptional Co-hosts Denise and Kell provide important info and analysis of all D.C. Sports including our Washington Redskins.  My segment, Kirby’s Corner, is a regular part of the show and I am proud to be involved with the best sports radio show on the air. so, click the link, it’s on the internet, enjoy the program every Tuesday night.  https://mountaintopnetwork.airtime.pro/  MARCH WITH US.