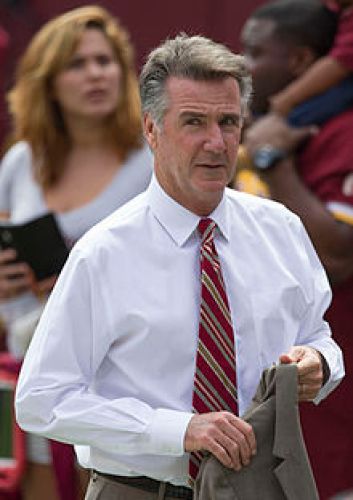 In the offseason, we have time to reflect on the past and predict the probable future.  It’s time us fans gave Redskins President Bruce Allen “some love” and appreciate what all he has done for our Washington Redskins and realize how fortunate we are to have him for our president.

We all know he grew up a Redskins fan since his HOF father George Allen gave us 7 winning seasons in the 70’s.  Bruce grew up in the DMV and attended college at the Uni of Richmond and was a successful punter on their football team for 3 yrs.  Even had a 76 yard punt in a game.  He was just inducted into the University of Richmond Athletics Hall of Fame.  He was drafted by the Colts in 1978 by head coach Ted Marchibroda who had served under George Allen with the Los Angeles Rams and Washington Redskins.

Allen became a good lawyer and over 3 decades of successful years as General Manager mostly and had great successes in the NFL and USFL.  He worked well with Jon Gruden in Oakland and also in Tampa Bay, Super Bowl teams. He knew Jay Gruden from 5 years in Tampa. Jay was an offensive assistant coach under Jon Gruden.

Bruce came to our Redskins when Mike Shanahan was the head coach in 2010 and Mike had the final say, but valued Bruce’s opinions, especially when it came to NFL Drafts. After Shanahan was fired, Bruce had the final say then.  Bruce is responsible for bringing back the gold pants worn by the Redskins back when his father was head coach, 1971 to 1977.  Seven winning seasons.

He fought the owners and NFL commish Roger Goodell over their fining the Redskins 36 million.  The salary cap strategy  used was perfectly legal and ethical but Giants owner Mara and Goodell conspired to find the Redskins guilty of breaking an unwritten rule.  Otherwise our Redskins could have had more money in free agency in 2013 and 2014,

We can give Bruce Allen credit for Trent Williams. Ryan Kerrigan  Also got DeSean Jackson to play here. Drafting RG3 since only Bruce had the relationship with Rams coach and general manager to get the deal done.  Mike Holmgreen is still crying about Bruce Allen snatching RG3 away from him.  We have to give Bruce credit for drafting Kirk Cousins, Alfred Morris, Ted Compton, and in 2013 Jordan Reed and Chris Thompson, 2014 he got us LB Trent Murphy, OT Morgan, Moses G Spencer, Long CB Bashaud Breeland, & WR Ryan Grant. In 2015 with his teaming with new GM Scot, they got us the best draft class in the NFL with Scherff, Preston Smith, Matt Jones, & Jamison Crowder.

To me, the biggest thing about President Bruce Allen is his dedication and lifelong connection to the Washington Redskins.  He has fought tooth and nail in the federal courts defending our logo, trademark and finally to the federal court to say ITS OUR RIGHT, ITS STAYS no matter what others think about it, and it was a long, knockdown, dragout legal fight but Bruce Allen is a great lawyer as well as a man of character and moral fiber.  Active in charity works, and  with the military.  He keeps tradition alive by respecting and recognizing former players.  He gets things done.

Bruce works well with Scot McCloughan and Jay Gruden, and owner Dan Snyder trusts Bruce more than anyone.  With their tireless efforts and years of experience, our team of management gives us the leadership we need to be a Super Bowl winning organization again.

I see great improvement in our coaching staff and in our starting quarterback Kirk Cousins and with the addition of a player here and there and growth and development of ones we have, our REDSKINS ON THE RISE,  and President Bruce Allen is a big reason for our future success.  Jay Gruden and the players win ON the FIELD and Bruce and Scot win OFF THE FIELD.