Although Cowboys starting quarterback Tony Romo is out for the season, backup quarterback Matt Cassel is a good quarterback also and of course they still have Dez Bryant and Jason Whitten and they will try their best to beat us.  Mathematically, they are not eliminated from the playoffs yet at 3 wins and 8 loses, last in the NFC East Division.  With division and archrival games, we can’t take a victory over Dallas for granted – we’ll have to earn it.

The Redskins Tailgate “Keys to Victory”:

Offense:
I’d like to see Kirk Cousins bootleg more vs the Cowboys. Our Oline needs to do a good job like they did vs the Giants protecting Kirk Cousins on pass plays.  Kirk seems to have conquered his tendency to throw interceptions when pressured, so I expect him to have another 300 yard passing day, 3 or more touchdown passes.

We’ll get the job done better if we feed the ball to Alfred Morris at least 20 times and keep “pounding the ground”.  We get a balance run and pass game going, we can win the time-of-possession battle + out score the Cowboys.  Of course when we are successful running the ball, it sets up play-action passes and Kirk Cousins quarterback should find DeSean Jackson for a deep pass completion, or TE Jordan Reed over the middle.

If DeSean Jackson is double-covered, BINGO – Pierre Garcon gets open or we screen pass’em to death.  Screen passes to Thompson and Matt  MOJO Jones should yield big runs also IF the blocking is executed well.

Coaching Considerations:
I’d like to see Alfred Morris run from the “I” formation since he is not a straight ‘hand-off runner’, but he does great when he gets the ball while he’s already moving forward. That’s why he was 2nd in the league in 2012 and has not been a dominate runner since.  The coaches need to run him in a pistol or wildcat type of formation, i.e. “the “I” it was called back in the day.

Defense:
If our defense pressures Matt Cassel like they did Eli last game, Cowboys will not score much,  We need to double and spy on Dez Bryant and we all know Jason Whitten is a favorite target.  I am confident our defense will not let the Cowboys run for many yards and they will get some turnovers and get our offense back  the football.  Key is to play for 4 quarters and keep fresh legs, Long drives by the offense helps keep our defense fresh and off the field too much.  It takes twice the energy to play defense that it does to play offense.  Our team is better and has more talent but we cannot let up on the Cowboys.  Defense must pressure Cassel  and bump the receivers coming off the line within the 1st 5 yards.  Defense needs to swarm to the ball like they did vs Giants. (like ugly on Jerry Jones)

I’d like to see our veteran leaders make sure our young guns know the big victory over the NY Giants putting us in 1st place in the division will mean nothing if we lose to the Cowboys.  To me, we need to sharpen our teeth on the Cowboys to get ready for road games coming up.  Winning is habit forming also and we need some back to back wins, get on a winning streak, so in this 5 game season, every game is a MUST WIN, CODE RED.  Dashon Goldson, Trent Wiliams, Terrance POTROAST Knighton, DeSean Jackson, Pierre Garcon, Ricky Jean-Francois, and other veteran leaders need to have another players only, no coaches meeting before the Cowboys game like they did vs the Giants.

Last key is to execute the plays, and make the blocks with no bonehead penalties.  Also, I personally like to get the ball first – hopefully win the toss and be on offense first. Then we score first and make Dallas play from behind. Our loud and proud 12th MAN loyal Redskins fans will pour on the pressure like stink on a fresh steaming cow pie.  They’ll know they are on hostile ground – not welcome, hated. 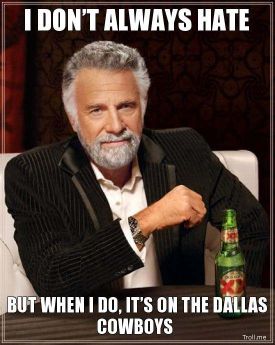 If Dallas wins the coin toss, I hope they defer. Why? I like to land the first punch.